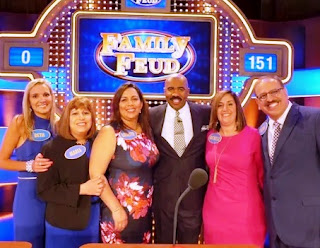 People get excited on game shows. Sometimes they even get really excited at game show auditions.

Rafael recovered and he also passed the tryout. His family made the show and their episode runs this week. When game shows say they’re looking for high-energy people, they’re not kidding.

I wouldn’t advise contestant wannabes to get so excited that they end up in the hospital. But sometimes you gotta do what you gotta do. Family Feud isn’t even a stunt show. I’m glad this guy didn’t try something like Wipeout. He might have ended up in traction.

Rafael isn’t saying anything about how the family did on the show. Confidentiality agreements and all that. But he is planning a watch party when the episode airs. Just hope he doesn’t get too excited at the party.

GAME OF THRONES: THE DANCE OF DRAGONS gets official pilot order at HBO

Book Review: "The Things We Keep" by Sally Hepworth