Facebook
Twitter
Google+
Pinterest
WhatsApp
Our time has come to say goodbye to Spain, and to set out for the UK. The rainy weather and the Celtic like stone walls in Galicia already prepared us for crossing the sea to the British Isles. Our paper maps, that have been guiding us through Europe so far, showed us that there is a ferry connection from Santander (northern Spain) to Portsmouth (southern England). Sailing time: 24h. This seemed to us a perfect way to spend a day, a full day on the open ocean, with no where to go, but looking at the endless blue passing by. So we booked our tickets and prepared ourselves to set off for our longest voyage so far.
Once we drove down to the Santander port, we found that something was off. It was very quiet, although it was not to long till embarking. Once we were at the docks, we heard the astounding news: ‘Your boat has been cancelled., due to the high winds on the open ocean. You were the only passengers we couldn’t get in contact with.’ Gideon asked: ‘So what do we do now?’ to which the lady in the booth replied: ‘The next boat to sail will go in four days.’ Four days! We didn’t have four days. We were planning on helping out with a Mission week in Exeter, which would be nearly over by then. Moreover, we wouldn’t have a bed for four nights.
‘Is there maybe an other port where we can sail to Portsmouth?’
‘I’m sorry, all ferries from Spain to England are canceled. The closest ferry that will take you is in Caen, France, a nine hour drive from here. I can book you for the 11pm, tomorrow, so that is 26 hours from now.’
This sounded possible, so we went back to the car. Slightly disillusioned that we couldn’t make the longest voyage in our lives, but hopeful that we could still make it in time for the Mission week.
In a Mission week, students from the local IFES communities organize different talks on topics related to Christianity. These talks are always during lunch and in the evening and include free lunch and sometimes also diner, which is the perfect setting to engage in good conversations with our fellow students. The theme of this week: ‘Real – What is real to you?’ 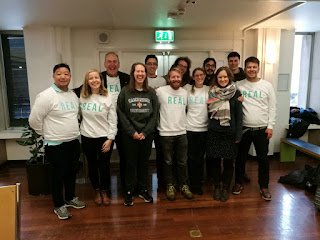 Gideon was once president in organizing such a Mission week in Wageningen, and one of the main speakers he invited was Bruce Gillingham from Oxford. So when we wanted to go to the UK, we asked Bruce if there would be anything that we could do to help out. As it turns out, he was very much in need of some help for the coming Mission week in Exeter, south-west of England. He asked the students of the Bible college in Oxford to sign up for any of the seven Mission weeks in the upcoming semester. Only one of them signed up for the one in Exeter. So our help was very welcome.
We arrived in Exeter nicely on time and could drop our stuff at our new hosts before going to the lunch talk. This time we were hosted in a student house, where four boys live, of which one of them, Jonathan, is part of the organizing committee of this Mission week. It felt good to be among students again, as if we never really left the student life. During this week we listened closely to speakers like Michael Ots (the initiator of Mission weeks in the UK) and Bruce that really inspire us. We had wonderful conversations with ‘fellow’ students and in this short time really got a click with some of them. 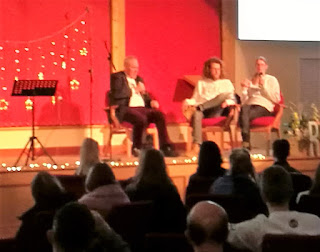 Bruce regularly holds interviews with inspiring people on stage as a break in his talks. One evening it was our turn and we were interviewed by Bruce about our christian lives and our journey. It is a nice experience to narrow down our christian life to a mere three questions and seek the core of what faith means to us and what our journey is about.
Special to this week was a very English concept called ‘Tea with Bruce’. After the lunch talk there is the opportunity to discuss some more about the topic around a nice cup of tea. During the week several students kept coming back, so we could get more in depth with the questions they had. There was Tom, the mathematician, who was very intrigued by the ‘impossibilities’ that Christianity presents, and there was Zoé, who is always looking for interesting people that think differently than she does, so we can learn from each other. 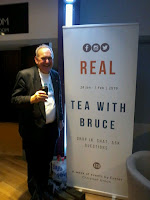 At one such ‘Tea with Bruce’ we were in a profound discussion, when it started to snow. Suddenly Zoé said to us: ‘I know people who are living on the street tonight. They are going to have a very rough time, we have to do something.’ So she suggested to go and buy sleeping bags and blankets to hand out to the people on the street. We were very enthusiastic about this idea, because we’ve been thinking during our travels what to do to help the people we meet, especially on the street. We’re also exited when some one asks us to think a little out of the box, and to see if it is possible. And we found out, it was possible, and apparently we had God on our side, for the sleeping bags were in reduced price, the shops were open for just another hour, and the people were very thankful to receive what we could give them. At the end of the evening we stepped in the dining hall with wet socks, cold and sore, but it was such a wonderful and rewarding evening and Zoé showed us a real piece of Gods Kingdom that night.