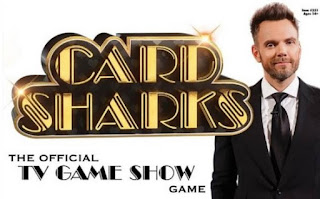 Can’t you play acey deucey with just a normal deck of cards? No matter, an outfit called Endless Games has released a new “home version of the current hit ABC-TV game show, Card Sharks.” Joel McHale is not included.

The linked blurb doesn’t say how much the game show game will cost. But Endless Games will trot it out at the American International Toy Fair – which is something I didn’t even know existed – in New York from February 22 to 25.

Endless Games also offers Password: The Original Word Association Game. This is one of the few old game shows that ABC hasn’t rebooted yet. Supposedly, the DNA between Pyramid and Password is a little too close (hello, Bob Stewart) and the Alphabet Net already has the Michael Strahan show on the air.

The company sells another game called The Floor is Lava. This one intrigues me. Maybe it features a built-in heating element that turns your floor into a molten mass of red-hot rubble. I’ve heard the term “shiny-floor shows” for traditional game shows. Now we’ve got a really warm floor, too.

The year that was

A History of Homeworld Part 4: The Guidestone