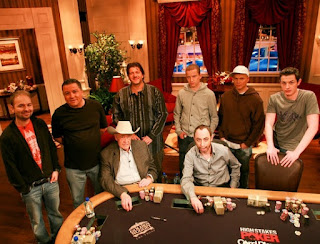 Purists will (and did) complain that GSN’s High Stakes Poker was not a game show.

I have to agree with the purists, but HSP was awfully close to a traditional game show, certainly more so than the usual reality fodder. Anyway, GSN has sold the rights to the show to a company called Poker Central. They will create new eps for their streaming app PokerGo.

Original producer Mori Eskandani will helm the reboot, though fondly remembered hosts A.J. Benza and Gabe Kaplan will apparently not come along for the ride. The linked story recounts the interesting history of the show on GSN. For quite a while High Stakes Poker rode high as the top-rated show on our little game show network. And the demos (remarkably for GSN) did not skew heavily old and female.

The story says that the Fed-induced collapse of online poker sites killed the show on GSN. That certainly didn’t help, but the change of GSN presidents in 2007 from Rich Cronin to David Goldhill might have been a bigger factor. The new team just wasn’t into poker, especially a show they inherited. Well, now High Stakes Poker is back in a new venue.

THE WITCHER renewed for second season at Netflix