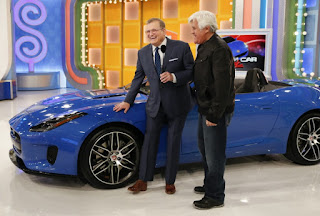 Readers of this blog know that I like to capitalize and bold BRAND NEW CAR. It’s the ultimate game show prize, other than a million bucks.

A car site (what else?) called Motor Authority went to The Price is Right, a show that’s been known to give away a car or four. The result is a 3,500-word essay on the lore and legends of car giveaways on the merchandise fest.

The site talks to Adam Sandler (no, not the comic) and Stan Blits, a couple of long-time staffers on the show, about the cars that have come and gone. We learn that the show scrimps a little nowadays, except during Dream Car week. The guys also talk about their personal auots, in case you’re interested in what TPiR staffers drive.

There follows a long interview with Drew Carey about his fleet of machines. The story offers a picture of Drew in front of what looks like a psychedelic relic of the 1960s. There is a car hidden under all the groooovy painting, though.

The story’s Freudian bottom line: Most car shows revolve around egos and superegos. The Price is Right is the id. I’m not quite sure what that means, if anything, and the Freudian rumble-bumble seems quaint and outdated. But car-winning contestants still get their kicks on TPiR’s own version of Route 66.