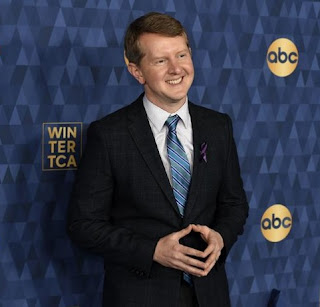 You’re probably acquainted with the gentleman in the screenshot. Or if you’re not, what are you doing on this blog?

The recently crowned Greatest of All Time on Jeopardy is coming to Southern Illinois University for a book-signing and game-playing appearance on March 27. The tickets are free, which is a nice price point.

The linked story recounts Ken’s history in and out of game shows. Much of it will probably be familiar to you. I’m not sure I knew that Ken spent much of his childhood in Korea and Singapore, where he watched Jeopardy on Armed Forces Network. Little did the folks at the network know that they were fostering the show’s future G.O.A.T.

The story mentions his many books, which have carved out a nice living for Ken and clan beyond the venerable quizzer. There’s even a nod toward Best Ever Trivia Show, which has now vanished from GSN but may return in a reworked format called Master Minds. Ken is still doing the trivia thing.

BLOG — Weekly Thoughts #5 — Looking into Other Anime Conventions; Having "Evenings" on a...

THE WITCHER becomes the second-biggest Netflix show of the year, drives game sales

Baptism of Fire by Andrzej Sapkowski