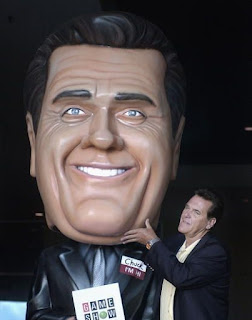 So I was innocently (or guiltily) watching a Cash Cab rerun from 2010 on GSN yesterday. And Ben uncorks this question: In 2003 GSN unveiled an 11 foot bobblehead named Chucklehead in honor of what iconic host?

To betray what a cluttered mind I have, I knew the answer to this question. As the screenshot indicates, in 2003 GSN rolled out a large ceramic image of Chuck Woolery, host of “seventeen” shows on the network at the time, as Pat Sajak once said on Wheel of Fortune. For whatever reason – probably because they never watched GSN – the contestants on the Cash Cab ep thought the bobblehead was of Johnny Carson.

Ben told them that they should have thought about game show hosts. (Though Johnny did host the ancient Who Do You Trust.) Little did the contestants know that their goof would show up later on, of all places, GSN.

Which got me thinking about the history of our little game show network. In 2001 GSN was in desperate straits and near collapse. Sony sold a half-interest in the network to Liberty Media and brought in a new exec team of Rich Cronin and Bob Boden to save the operation. As it turned out, Chuck Woolery was a big part of GSN’s subsequent turnaround with a little word game named Lingo and a lot of his old shows in reruns. GSN even ran a reality series called Naturally Stoned about the guy, which was actually the immediate inspiration for the large bobblehead.

Of course, GSN survived and has even snuck into the top twenty cable nets in the latest week. Sony has reacquired the interest in the network they sold in 2001. Chuck Woolery eventually went on to political punditry, where (as political pundits do) he has garnered much praise and much distaste. And on Cash Cab reruns his bobblehead is still recalled. Though I have no idea where the ceramic creation is today.

LORD OF THE RINGS: THE SECOND AGE loses one actor and gains another