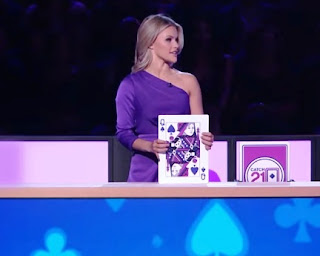 No surprise but Catch 21 will be back with new eps this year. A Las Vegas Sun story says the show is looking for local contestants to tape new episodes in May and June. The story mentions that Alfonso Ribeiro and Witney Carson will return as the host and dealer.

While the reboot hasn’t produced enormous ratings for GSN, the numbers have certainly been respectable. The new episodes of the reboot have often landed on the top 150 charts at Show Buzz Daily. The story doesn’t say how many episodes GSN will tape in the new batch, but there will probably be plenty of them.

There are the usual rules and requests. Contestants must be at least 18 years old. And GSN looks for “people with great personality from all walks of life who want to have some fun.” So if you don’t have much of a personality and you don’t want to have fun, well…

I assume that America Says and Common Knowledge will also get new seasons sooner or later. The show on the bubble may be Get a Clue, which fell off the Show Buzz Daily charts quickly. Not to mention that GSN is apparently taping Master Minds, the reworked Best Ever Trivia Show. We’ll see what happens with all the originals.

Greatest of all time

The year that was

Blood of Elves by Andrzej Sapkowski