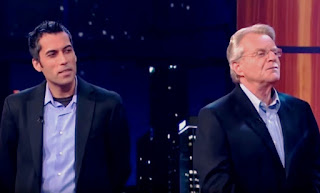 Once upon a time GSN ran Baggage, which I always thought was one of the very best descendants of the ancient Dating Game. The show played off the suitcase reveal gimmick of Deal or No Deal for a fun half-hour of dating-based gamesmanship. Baggage lasted on GSN for over 300 episodes, partly because it skewed very young by the network’s geriatric standards.

Of course, the host was the irrepressible (or insufferable, depending on your point of view) Jerry Springer. Much to the relief of the contestants there were no fisticuffs on Baggage, unlike Jerry’s raucous talk show. As many of you probably know, the talk show is mercifully gone but Jerry soldiers on with a syndie court show.

I’m not a big fan of such faux-legal projects, but we all gotta make a living. Springer has earned a renewal for his Judge Jerry effort, and he promises that he won’t seek a Supreme Court appointment. In fact, Jerry has always harbored political ambitions. He was once mayor of my hometown Cincinnati. But the talk show pretty much finished off that possible career.

THE WITCHER renewed for second season at Netflix

LORD OF THE RINGS: THE SECOND AGE confirms additional castmembers